"The Sky Blue Diamond" — the highly touted headliner of Sotheby's Magnificent Jewels and Noble Jewels sale — fetched $17.1 million in Geneva yesterday. The hammer price was in the lower range of the pre-sale estimate of $15 million to $25 million. 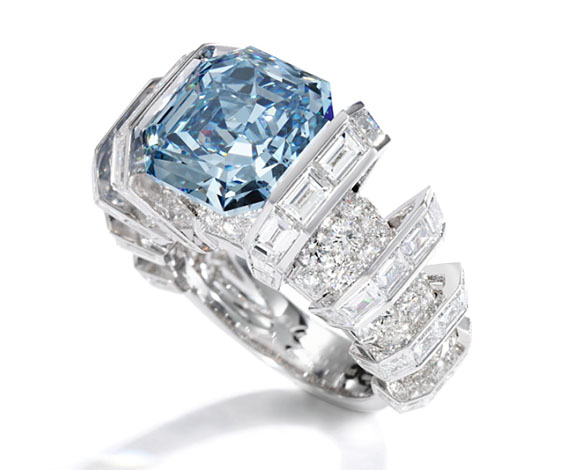 At $2.13 million per carat, the performance of the square-cut, 8.01-carat Sky Blue Diamond was lukewarm compared to other high-profile blue diamonds that have captivated gem lovers over the past year. 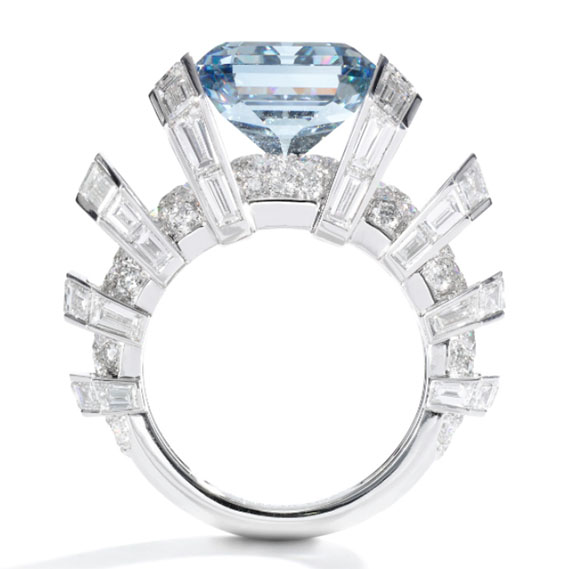 “The Blue Moon of Josephine,” for example, established a new record for the highest price paid per carat for any gemstone when the hammer went down at Sotheby’s Geneva exactly 12 months ago. The internally flawless, 12.03-carat, cushion-shaped, fancy vivid blue diamond sold for $48.5 million, or $4.03 million per carat.

In May of this year, “The Oppenheimer Blue” became the most expensive gem ever auctioned when it sold for $57.5 million at Christie’s Geneva. The fancy vivid blue, step-cut, rectangular-shaped diamond weighed 14.62 carats and earned a clarity rating of VVS1. Its price per carat was $3.96 million.

Sotheby's had high hopes for The Sky Blue Diamond due to its mesmerizing Fancy Vivid Blue color. Had it sold at the top of the estimated range, it would have yielded $3.12 million per carat and earned a place among the finest fancy vivid blue diamonds of all time.

David Bennett, Worldwide Chairman of Sotheby’s International Jewelry Division, offered this pre-sale description of the stone: “The Sky Blue Diamond is of a wonderfully clear celestial blue, presented in an extremely elegant square emerald cut – in my view, the most flattering of all the cuts for a colored diamond. This important gem will, I am sure, captivate all collectors of exceptional gemstones.” 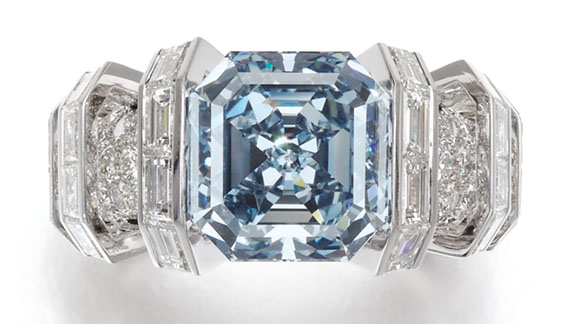 The Sky Blue Diamond, which has a clarity rating of VVS1 and a purity rating of Type IIb, is set in a ring by Cartier. The geometric design is accented with brilliant-cut and baguette diamonds.

Its Fancy Vivid Blue designation by the Gemological Institute of America (GIA) is the highest possible color grading — a distinction awarded to fewer than 1% of all blue diamonds submitted to the GIA.