Back on the Block: 59.60-Carat 'Pink Star' Looks to Regain the Title of Priciest Diamond Ever

All eyes will be on the stunning 59.60-carat “Pink Star” diamond when it returns to the big stage at Sotheby's Hong Kong on April 4. If all goes as planned, the largest internally flawless, fancy vivid pink diamond ever graded by the Gemological Institute of America (GIA) will regain its title as the world's most valuable gem. The hammer price is expected to exceed $60 million. 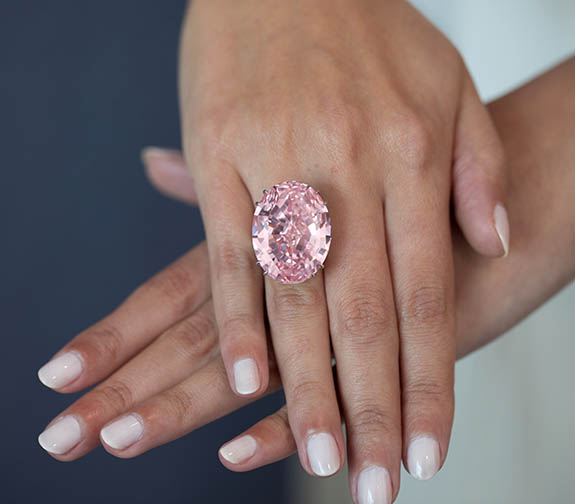 Back in November of 2013, the same gem stunned the jewelry world when it fetched $83 million at Sotheby's Geneva. The winning bid had surpassed the pre-show estimate by $23 million. But, in February of 2014, Sotheby's announced that the sale was canceled. The auction house paid the guaranteed minimum of $60 million and took ownership of the gem. In 2016, the auction house reported that two firms — Diacore and Mellen Inc. — had purchased an interest in the remarkable Pink Star, with the third partner being Sotheby’s.

Diacore (formerly Steinmetz Diamond Group), incidentally, has an intimate connection to the Pink Star. It's the company responsible for taking the original 132.5-carat rough diamond and fashioning it into the flawless 59.60-carat masterpiece — a process that would take two years.

“I am delighted to be bringing this magnificent stone back to the market,” noted David Bennett, worldwide chairman of Sotheby’s jewelry division. “The extraordinary size of this 59.60-carat diamond, paired with its richness of color, surpasses any known pink diamond recorded in history.” 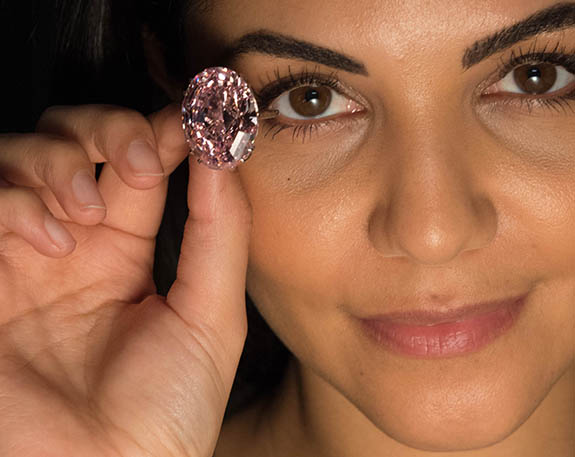 A monograph of the Pink Star authored by GIA waxed poetic, characterizing it as a “true masterpiece of nature, beyond characterization with human vocabulary."

Only one diamond in the world currently stands in the way of the Pink Star becoming the priciest gemstone ever sold at auction, and that is the 14.62-carat Oppenheimer Blue, an emerald-cut, VVS1, fancy vivid blue diamond, which sold at Christie's Geneva in May of 2016 for $57.5 million.

The Pink Star is more than twice the weight of the "Graff Pink," which currently holds the auction record for a pink diamond. The 24.78-carat, emerald-cut Graff Pink fetched $46.2 million at Sotheby's Geneva in 2010.

The per-carat auction record of $4.1 million is still held by the 12.03-carat Blue Moon of Josephine. That gem sold for $48.5 million at Sotheby’s Geneva in November of 2015.